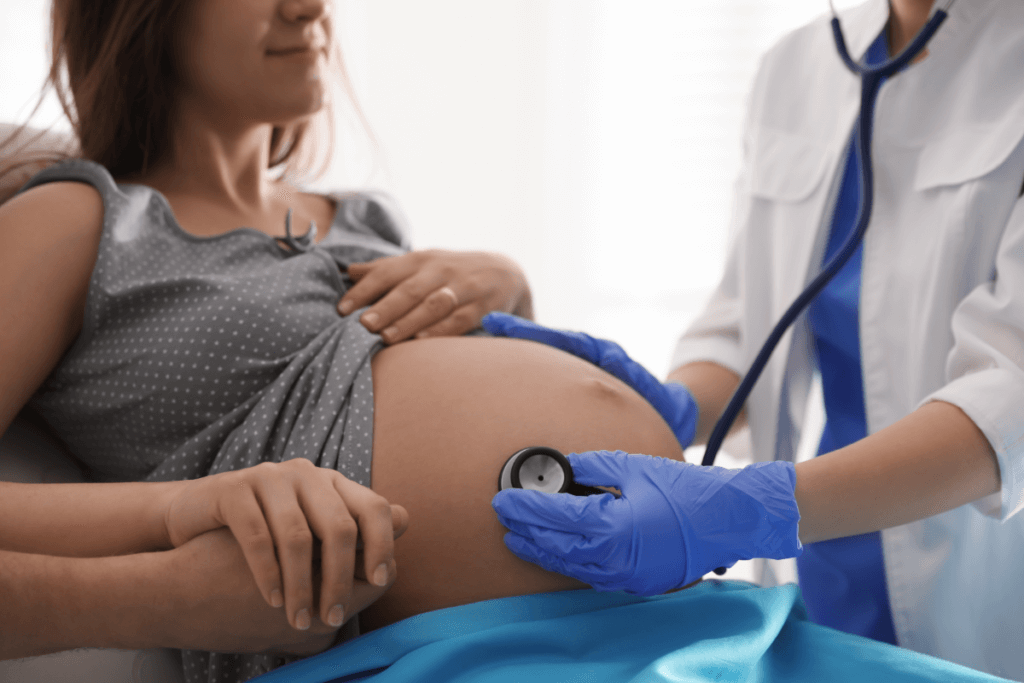 When a loved one becomes pregnant, it’s often a celebratory and joyful time for family and friends. Many celebrations and family gatherings are had in anticipation of the new arrival and everyone is generally in good spirits. What might surprise some people is that there are often many health risks for both the mother and the child during pregnancy and childbirth. Thus, it is important for the expectant mother, as well as her loved ones, to know about the common pregnancy dangers for mother and baby.

Why Is the Maternal Mortality Rate So High in The U.S.?

Advances in medical technology have made America a leader in healthcare. Despite these advances, our country has a shockingly high maternal mortality rate. A number of factors contribute to the unnecessarily American maternal mortality rate, many of which are avoidable with better patient care throughout the pregnancy and during childbirth.

The Dangers of Pregnancy

Although most women go through pregnancy without any complications, 150,000 women in America experience a serious complication or near-death experience, with between 700 and 1,200 women experiencing fatal pregnancy complications. In 2020, 861 women died of maternal causes in the United States, up from 754 in 2019. This might not seem that high, but it represents a higher maternal mortality rate than many other first-world countries like the United Kingdom, Germany, Norway, and Italy, among others. In fact, women in the U.S. face the highest rates of preventable and maternal mortality when compared with women in 10 other wealthy nations, including Australia, Canada, France, the Netherlands, New Zealand, Sweden, and Switzerland.

At least 46 percent of maternal deaths among African American women during or right after pregnancy could have been prevented (versus 33 percent for Caucasian women). This is indicative of a systematic dismissal of the symptoms and complaints of African American maternity patients.

Patients Have a Right to Be Heard

Regardless of race, patients have a right to have their concerns heard by their doctors and other medical providers. Inherent bias has cost too many women and their babies serious injuries and even death. Doctors have a responsibility to care for patients, but by dismissing their complaints and concerns, they are putting mother and baby in danger. Sadly, women going through childbirth do not always have the time or the financial means to seek a second opinion from another doctor or hospital, which means listening to patients is particularly important.

Maternal infection is any type of infection in a pregnant woman that has the capability to travel through the blood, placenta, or birth canal during pregnancy or childbirth. If left undiagnosed, such infections can result in serious – and in some cases long-term – injuries and/or disabilities to the baby.

The most common maternal infections include:

The birth of a new child is usually a moving and heartwarming occasion, especially for the new parents, with many family members around counting down the minutes until the new addition is born. What many people don’t talk about prior to and during the birthing process is the risk of uterine ruptures, which can happen during childbirth. These occurrences can instantly turn a happy and jovial moment into an utter nightmare.

Uterine ruptures are rare in relation to the number of births overall, but mothers who have previously given birth via a Cesarean section or C-section are at an increased risk. After having a C-section, the post-birth healing process can create surgical scar tissue in the uterine wall, which can increase the risk of a later uterine rupture during pregnancy and/or childbirth.

These horrific instances happen to mothers across the United States. The rate of occurrence of a uterine rupture in women who previously delivered via C-section is as high as 1 in 200. For women who have had two or more prior C-sections, the rate of rupture climbs to 1 in 26.

There are a variety of symptoms associated with uterine rupture, including:

Unfortunately, an official diagnosis of a potential uterine rupture can only be made during surgery. A doctor or physician who fails to properly diagnose or treat a ruptured uterus can be liable for damages caused by medical malpractice and/or misdiagnosis of the condition.

Despite advances in medicine, the U.S. remains behind countries like Great Britain, whose mothers die from childbirth complications at one-third of the rate they do in the U.S. The only exception is the state of California, which has drastically reduced its maternal mortality rate in recent years by implementing various safety procedures and standardizing protocols for pregnant women. Hospitals in the rest of the country are reluctant to adopt similar protocols that could prevent complications during pregnancy and save lives.

While many women in the U.S. give birth without suffering complications, tens of thousands of women each year suffer severe and life-threatening obstetrical complications. This is particularly tragic considering experts estimate half of these injuries and deaths could be prevented with better care.

One way California hospitals decreased maternal mortality rates is with the promotion of “tool kits.” These kits contain childbirth safety practices, policies, procedures, and checklists, that when used together can reduce maternal injuries and deaths. They include policies and recommendations for monitoring and administering blood pressure medication to mothers with high blood pressure and measuring blood loss by weight, not by sight.

Hospitals outside of California can rely on the Alliance for Innovation on Maternal Health (AIM) program. This maternal safety and quality improvement initiative seek to improve maternal mortality rates by implementing protocols and establishing better standards for care. Unfortunately, participation is voluntary, and less than half of all birthing hospitals in the United States currently participate.

There are a number of complications that can arise during pregnancy, but with proper identification and treatment, most can be addressed before they cause serious injuries. Unfortunately, without proper protocols, patients are left voicing their concerns to doctors and nurses that may or may not listen to them. Expectant mothers and their babies are left to rely on their healthcare providers for care and expertise, but if they aren’t attentive and/or negligently fail to provide the appropriate care, women and their infants pay the price.

The sad reality is many childbirth complications are caused by healthcare provider negligence. It’s difficult for new mothers to find out what may have gone wrong during childbirth and/or what caused any maternal complications because hospitals don’t want to admit their mistakes. If you or someone you love suffered complications during pregnancy and/or delivery at a Philadelphia hospital, don’t wait to contact Lopez McHugh LLP. We will request all applicable medical records and work with trusted, non-affiliated medical professionals to uncover any negligence and hold the responsible healthcare providers accountable for the harm they caused you and your loved ones. If you or your baby suffered injuries or someone you love was wrongfully killed due to a maternal infection, uterine rupture, or other issue caused by medical negligence or malpractice, the effects can be devastating. At Lopez McHugh LLP, our experienced birth injury lawyers are here to fight for the compensation you and your family deserve.