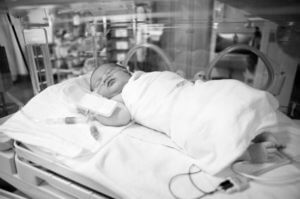 Hypoxia develops when your body and specifically your brain doesn’t get enough oxygen through a process called asphyxiation. When you breathe normally, oxygen comes into your lungs and is sent through your blood to the cells in your muscle and organ tissues. This allows your body to function properly by using the oxygen to make energy. An interruption to the breathing process, preventing oxygen from coming into your lungs or carbon dioxide from leaving the lungs, can cause loss of consciousness or death. After oxygen has been prevented from entering the body, it causes a condition called hypoxemia, or low oxygen in the blood. When that level of low oxygen in the blood has reduced the level of tissue oxygenation, it is known as hypoxia. These are extremely dangerous conditions, which when they occur during childbirth can cause a devastating birth injury. Without oxygen, the lungs, liver, brain, and other vital organs can suffer permanent damage in as little as a few minutes.

Perinatal asphyxia, which causes hypoxia, is the lack of blood flow or gas exchange to or from the fetus in the time immediately before, during, or after the birth process. When prenatal or pulmonary (post-birth) gas exchange is compromised or stops altogether, this causes hypoxemia. Hypoxia soon follows when the levels of oxygen in the baby’s or mother’s muscles and organs have been reduced.

Hypoxia can cause severe and permanent damage to the baby in a very short matter of time, so it is vital that parents know the early signs of it, especially when a woman is in labor. The faster the signs are recognized, the sooner the mother and/or baby can be treated. Both the mother and child can show signs of hypoxia, and they include any combination of:

If a patient displays any of these signs, they must receive oxygen as quickly as possible to avoid permanent damage.

Many complications during childbirth can lead to a lack of oxygen to the mother or baby’s brain, muscles, and organs. Some causes of birth asphyxia include:

Cases of birth hypoxia are treatable; however, most are preventable in the first place and birth injuries caused by hypoxia should be avoided at all costs.

If the baby has been diagnosed with hypoxia before birth, the mother may be given supplemental oxygen before delivery and doctors may decide to perform an emergency Caesarean section or delivery to get oxygen to the baby directly. After a baby is born and diagnosed with hypoxia, the baby may be put on assisted ventilation and be given medications to support breathing and to maintain a normal blood pressure. An extracorporeal membrane oxygenation (ECMO) machine may be used for babies who are experiencing serious organ failure, specifically failure of the heart and lungs. This machine works by draining the baby’s blood into an artificial lung where oxygen is added, carbon dioxide is removed, and the blood is pumped back into the baby. This is an extreme treatment; and, while successful, it is only a temporary support to deliver oxygen to the baby’s brain and body.

Babies and mothers with mild hypoxia that is addressed quickly may recover partially or fully with appropriate, fast treatment. This requires the doctors to be fully aware of any and all signs of hypoxia that the mother and baby may be showing during birth.

If the doctors catch hypoxia too late and the mother’s and baby’s bodies did not get enough oxygen for a longer period of time, they may suffer from a multitude of serious, permanent injuries, including but are not limited to:

Many of these medical conditions will cause lifelong disabilities and require significant financial commitments as the mother or baby may need physical therapy, special education, medical devices, and more. Many families are unable to meet this financial burden as the medical bills keep piling up.

If you live in Pennsylvania and your child was diagnosed with a birth injury – including cerebral palsy – there are options available for your family. The experienced hypoxia lawyers at Lopez McHugh LLP can help. We can file a claim on your behalf to pursue compensation to provide lifelong treatment, therapy, and a secure future for your child, giving personal attention to each family we represent. Contact us today to schedule a free consultation.