What is Erb’s Palsy? 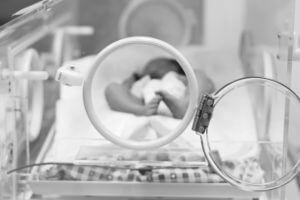 Erb’s Palsy is an injury sustained to the brachial plexus during birth, primarily to the cervical roots of the nerves located in the C5 and C6 vertebrae. These two vertebrae are located at the lower portion of the neck and make up part of the cervical spine, which is what supports the head and connects it to the upper shoulders. It is a serious birth injury that permanently affects the life of a child.

Erb’s point is where the C5 and C6 vertebrae unite to form the upper trunk or section of the brachial plexus. The brachial plexus is a complex network of nerves extending from the spinal cord through the neck and into the armpit. Erb’s Palsy is a disruption in the nervous system’s communication at Erb’s point, causing weakness in the arm.

The main cause is damage to the neck during childbirth. This often happens with larger babies who cannot fit through the birth canal. Medical staff often use force to pull these babies out. If too much force is used or the angle is wrong, permanent damage occurs. Erb’s Palsy is often caused when an infant’s neck is stretched to the side during delivery, damaging the nerves.

Doctors must use extra care during the birthing process, especially in expectant mothers with larger children. Other risk factors include mothers who have prolonged labor, a breech birth, gestational diabetes, or birth with a fetal malposition.

There are four types of nerve injuries that can occur:

The type of nerve injury will dictate the treatment plan. Any type of nerve injury can impact the growth and development of a child’s shoulder, and should be regularly monitored by a physician. A pediatrician may order several different diagnostic tests in order to assess the baby’s condition, including an x-ray, MRI, and/or ultrasound. They may also test for nerve signals in the upper arm using an electromyogram (EMG) and/or a nerve conduction study (NCS).

Any nerve damage takes months or even years to repair – primarily because the nerves themselves recover very slowly. Rupture or avulsion nerve injuries are the most severe types. These often require surgical intervention and years of daily physical and rehabilitative therapy. Up to 25% of children diagnosed with Erb’s Palsy have some kind of permanent impairment, including weakness in their shoulder, arm, or hand.

One of the most common signs of this birth injury is weakness or paralysis in the shoulder, arm, or hand. Often referred to as “waiter’s tip hand,” the arm hangs limply from the shoulder with a rotation of the forearm plus wrist and finger flexion. Even newborns should be able to move both arms; and, if a difference in how both move is noted, Erb’s Palsy may be the cause.

A common way to spot the condition is if a baby holds one of their arms down by their side with the forearm turned inward and/or the wrist bent. Other telltale signs include not holding both arms up during normal activity or holding one arm up more often than the other. Full use of the shoulder but not the hand, or vice versa, can also be a symptom.

The most common symptoms to look out for include:

Erb’s Palsy is most often preventable; and, the medical professionals who cause this type of nerve injury in newborns should be held accountable for the damages caused by their actions. If you believe your child is suffering from Erb’s Palsy or if your child has been diagnosed with the condition, you likely have many questions. Contact the experienced birth injury lawyers at Lopez McHugh LLP today for a free consultation to discuss your case. We can analyze your situation and explain your legal options.