Types of Nursing Home Abuse: What You Need to Know and Warning Signs 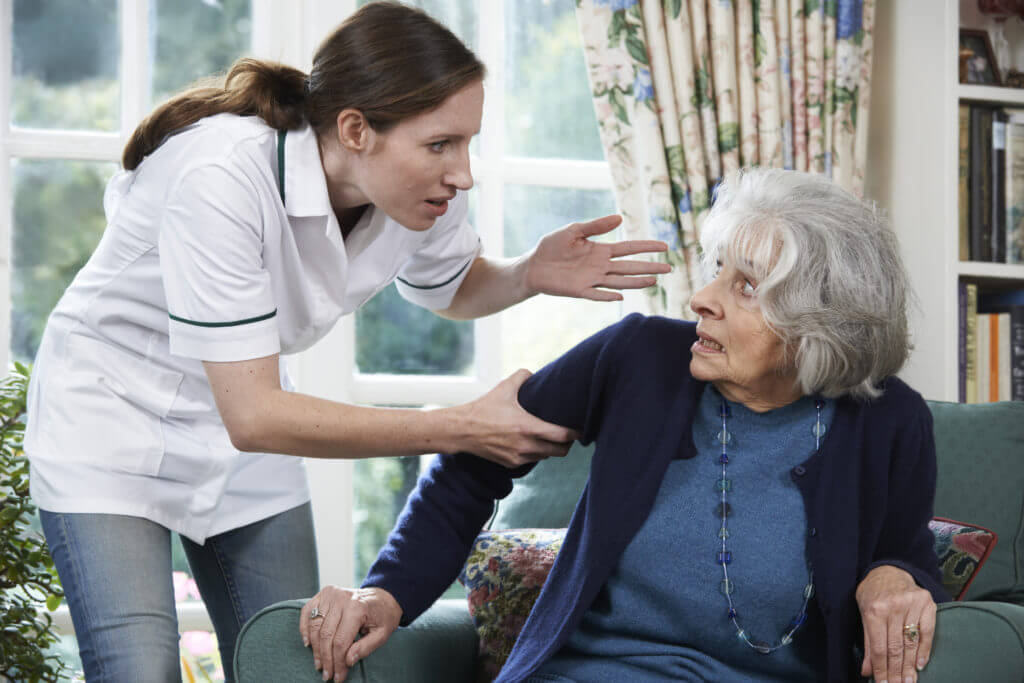 The later years of an elderly person’s life are a time when they deserve kindness, respect, and quality care. But sometimes our elderly loved ones instead face abuse and neglect by caretakers. Dementia patients are especially vulnerable to nursing home abuse because the disease can prevent them from reporting or even recognizing the abuse. A variety of people can potentially take advantage of the aged by exploiting their cognitive impairments and other medical problems.

It’s hard to imagine that the people we entrust to take care of our loved ones would abuse them, but sadly, this is increasingly becoming a problem in nursing homes. Residents in nursing homes can become victims of physical abuse from facility staff and even other residents. Discovering your loved one has suffered from nursing home abuse can be a devastating situation. Although it’s very upsetting to learn a loved one is being physically abused in a nursing home, it’s important to know what to do in these situations so you can best help them and prevent others in their care from also being harmed.

How You Can Protect Your Loved One

When looking into a nursing home for your loved one, ask facilities if they have written protocols for handling verbal, physical, and sexual abuse by staff members and other residents. Facilities prepared for these situations are more likely to see the warning signs and prevent dangerous incidents. It is also important to maintain an open line of communication with your loved one in the facility.

Ask the facility what its cell phone policy is and what punishments are issued for violations. Also, ask if it has had a problem with staff cell phone use in the past.

In addition, the Centers for Medicare & Medicaid Services (CMS) has improved its online tools for consumers. The agency’s Nursing Home Compare database allows consumers to investigate the health and safety ratings of nursing homes and other care facilities.

What To Do If Your Loved One Experiences Nursing Home Abuse

If you believe your loved one is suffering abuse, you need to talk with them without any staff or other residents present. Some victims are afraid to speak out about their abusers, so it’s important to let your love know you’re here to help and that you will protect them from future harm. This matters for obvious reasons, but also the Department of Health and Human Services has found that elders who have been abused have a 300 percent higher risk of death than those who are not mistreated.

You may need to take your elderly loved one to get medical treatment for their injuries. Some injuries could be internal and require diagnostic scans to detect, so it’s important to have an independent medical professional not associated with the care facility evaluate the victim.

Once your loved one has received medical treatment, you need to immediately contact a nursing home injury attorney. Contacting a lawyer isn’t just about filing a lawsuit against the facility – you are also helping prevent others from being hurt. The sad reality of nursing home abuse is it largely goes uninvestigated. There are a variety of government agencies tasked with investigating these crimes, but they are grossly understaffed so many claims are never properly investigated.

The failure to investigate these claims not only deprives victims of justice but also allows harmful individuals to continue abusing residents. By engaging the help of legal counsel, you can ensure the abuser is removed from the nursing home, and that the elder care facility takes action to remedy the situation. A lawyer will also be able to help with a law enforcement investigation.

How To Report Abuse

While emotions can often run high after finding out a beloved older loved one has been harmed, the best thing to do is to immediately report the abuse to either the Department of Aging or Adult Protective Services. Reporting nursing home abuse is a huge first step toward getting justice for your loved one, but unfortunately, it can be a long process.

Adult Protective Services (APS) is responsible for investigating reports of neglect and abuse of the elderly. When APS receives a report, it assesses the facts and determines whether or not it will investigate. If APS decides to investigate, it will conduct an investigation similar to any other criminal investigation.

APS representatives will interview nursing home residents and staff and review the facility’s record with the Centers For Medicare & Medicaid Services (CMS) to help them understand how the facility operates and if it meets all applicable health and safety standards.

If APS declines to investigate reported nursing home abuse, victims still have options to seek justice. Hiring an experienced nursing home abuse law firm can help put a stop to the abuse and protect your loved one and other residents. An experienced lawyer will conduct their own investigation and determine the best strategy to pursue compensation and hold the facility and offenders accountable for their actions.

The Office of the Inspector General in the Department of Health and Human Services investigated nursing home abuse, and the findings were so shocking they released an alert to warn the public and encourage immediate changes. According to the alert, 28% of serious instances of nursing home abuse go unreported. The report defines “serious” instances of abuse as any event that caused bodily injury requiring emergency medical treatment.

There are likely many more abuse victims out there. The Office of the Inspector General was only able to uncover unreported instances of abuse because the victims were taken to an emergency care center for treatment. Unfortunately, many victims do not receive this treatment, making it impossible to know just how many there are.

Nursing home abuse isn’t just illegal, it’s also bad for business. Because of the financial implications of nursing home abuse, many facilities wrongfully choose to sweep these instances under the rug. Nursing homes could find themselves fighting hefty lawsuits by victims and their families, not to mention the damage is done to their reputation. Additionally, these facilities could be massively fined by federal agencies. Therefore, for victims and their families, the only way to obtain answers and justice is often to file a lawsuit against the facility.

In addition to emergency room staff, nurses, and physicians, radiologists are finding new ways to detect cases of nursing home abuse that can often go unnoticed. In some cases, emergency radiologists may even be able to do more to help than the average physician.

Many emergency radiologists and imaging professionals have a hard time detecting physical abuse due to the difficulty of determining the cause of certain injuries. One solution could be to look out for a mechanism mismatch – where an injury pattern is inconsistent with the cause described by the patient and/or the caregivers.

In order to further expand and optimize the role of radiologists in such cases, definitive imaging standards should be created to correlate the abuse with the methods for identifying it. In addition, cultural and practical modifications to the radiologists’ workflows must be undertaken to enable them to contribute more confidently to detecting nursing home abuse.

Resident on Resident Abuse: What Is a Nursing Home’s Responsibility?

There are many threats your loved one can face in a nursing home. When these threats come from staff, the facility may be held liable for the injuries caused by its employees. Unfortunately, residents in these facilities can also face threats from other residents, and many people are unaware of a nursing home’s responsibility in these situations.

Nursing homes can house very dangerous people as they are not allowed to deny residency to individuals based on their criminal records; and, while most facilities perform background checks on potential residents, they are not obligated to share the results with other residents. This means many elderly residents live with convicted sex offenders and felons without even knowing it.

Although a nursing home doesn’t have to share a resident’s criminal background, it is still responsible for keeping the other residents safe from resident-on-resident abuse. If a nursing home grants residency to an individual with a criminal record, extra care must be taken to monitor them. If any abuse does occur, the facility must immediately address it and report the abuse to the police.

A disturbing trend has emerged in nursing home facilities that have authorities, patient advocates, and residents’ families deeply concerned. Some nursing home staff are using cell phones to take humiliating pictures and videos of the residents and post them on social media.

Several high-profile instances of nursing home staff using their cell phones and social media accounts to capture resident abuse and even death have made headlines across the country.

In another case, three assisted living center employees recorded a video of a hospice patient and posted it on Snapchat. Thankfully, another employee saw the nursing home abuse video and reported it to authorities. The video showed a resident who had recently suffered a stroke awaiting care from a hospice nurse. She was left in the care of three employees ordered to monitor her condition, but instead, they filmed a profanity-laced video in the room while smoking from a vape pen. The three posted the video to Snapchat with the label “The End.” Not only did the three ignore the woman and fail to provide care, but they also invaded her privacy and exploited her condition.

Unfortunately, change does not happen overnight. While much is being done to better understand nursing home abuse and make changes to protect the elderly, these changes are coming too late for many. Nursing home abuse is running rampant across the country and victims and their families often don’t know what to do or where to turn.

If your loved one has suffered injuries or passed away as a result of nursing home abuse, you should contact the experienced nursing home abuse lawyers at Lopez McHugh LLP. Our legal team can put a stop to the abuse and seek and obtain the compensation that is deserved.